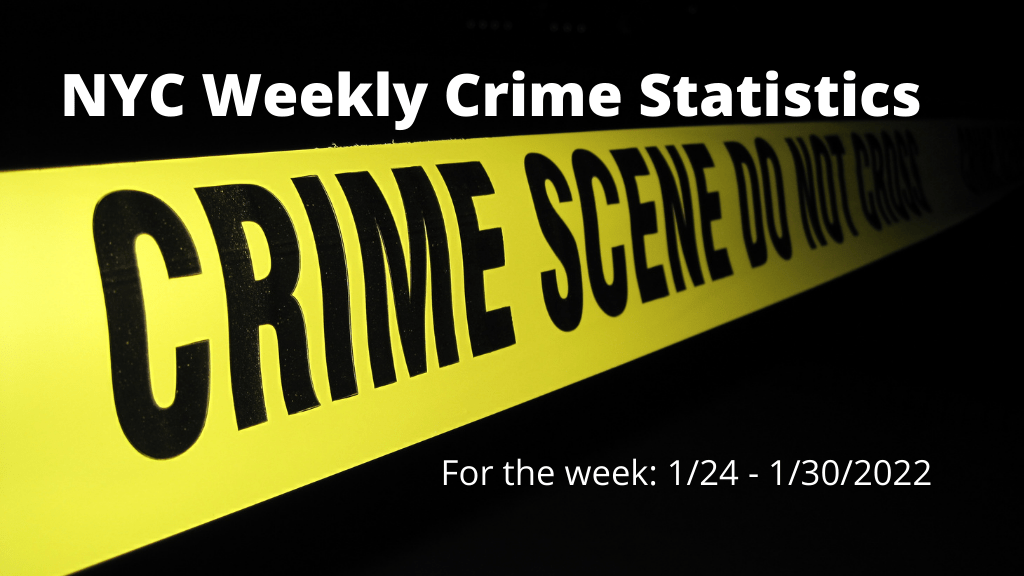 NYC Crime is Off to the Races So Far in 2o22

NYC crime is off to the races so far in 2022. Yes, it’s only one month into the new year, but a cold and snowy January didn’t deter the criminals. This post covers the week beginning January 24, 2022 and ending January 30, 2022.

Mother’s Day is often the signal for the warm weather and a common joke amongst cops that it also signals the ‘Opening Day’ for crime. The warm weather is still a few months away and residents of New York City should be concerned.

The Seven Major Felonies tracked and submitted to the FBI’s Uniform Crime Report (UCR) by the NYPD are (in order of severity): Murder, Rape, Robbery, Felony Assault, Burglary, Grand Larceny, and Grand Larceny Auto. The only major felony that the FBI tracks but is not reported by the NYPD is Arson.

Other Points of Interest

Mayor Eric Adams released his plan last week to address gun violence in New York City. No one expected or should’ve expected immediate results. It could take months before we see any progress. The plan calls for a number of things such as violence interruptors, that could take several months or even years before they get off the ground. For now, all focus will be on policing. Will it succeed? There are big “Ifs.” If half of the City Council gets on the same page as the Mayor, if the NYS Assembly and the Governor tweak the reforms, and if the District Attorney’s prosecute violent cases as they should, then maybe it can be turned around.

That’s asking for a miracle.

Is Violent Crime Up in NYC?