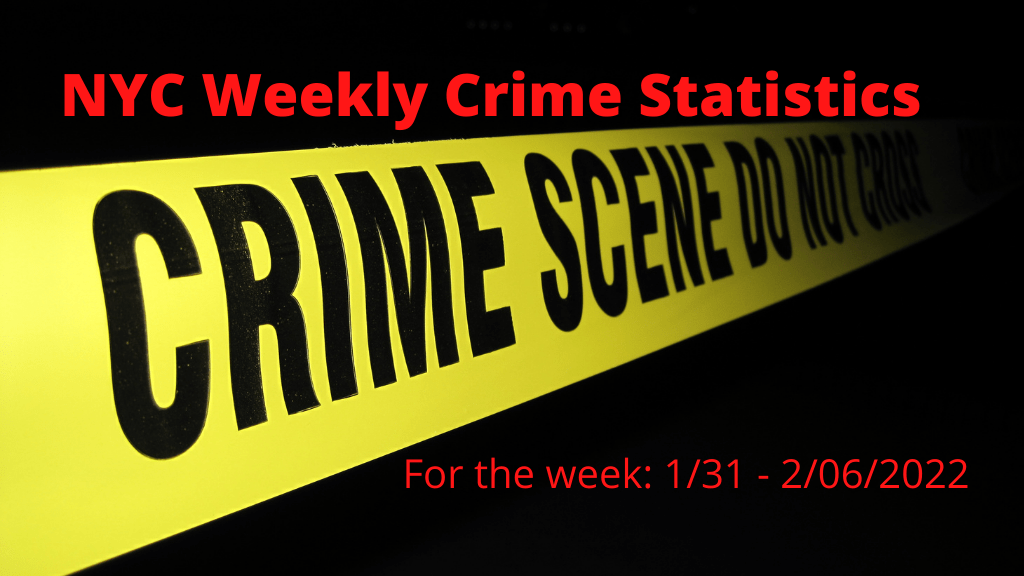 Crime in NYC Continues to Surge

Crime in NYC continues to surge. Unfortunately, nothing seems to be going in the right direction for the new mayor and his police commissioner. The best cop I ever met was Mother Nature and she was no help this week either. Snow and freezing temperatures didn’t keep the criminals away. February is not off to a good start. This post covers the week beginning January 31, 2022 and ending February 6, 2022.

There was only one bright spot, if you want to call it that: There was no change in Murder for the week: 7 vs. 7. If there is a crime that we need to be down, this is it. Violence is still a problem. Two weeks in a row, Murder statistics has shown no change. The question is, will that continue? Other than that, there is nothing else that we can remotely say was a positive.  Crime for the week was up 59.51% from last week.

Other Points of Interest

We saw a significant drop in Hate Crimes reported during the week, 1 vs 7. Hate Crimes are still up +23.8% Year-To-Date. However, there is bad news on the horizon for Hate Crimes. There were three (3) reported attacks against Jewish people in Brooklyn within the last twenty-four hours of this post. I don’t have last year’s numbers to see what the City is up against for the week.

Mayor Adams, if you were going to implement your crime plan soon, now is the time. If NYC doesn’t get it’s hands around Grand Larcenies, The Year-To-Date will be lost in February.

2 thoughts on “Crime in NYC Continues to Surge”