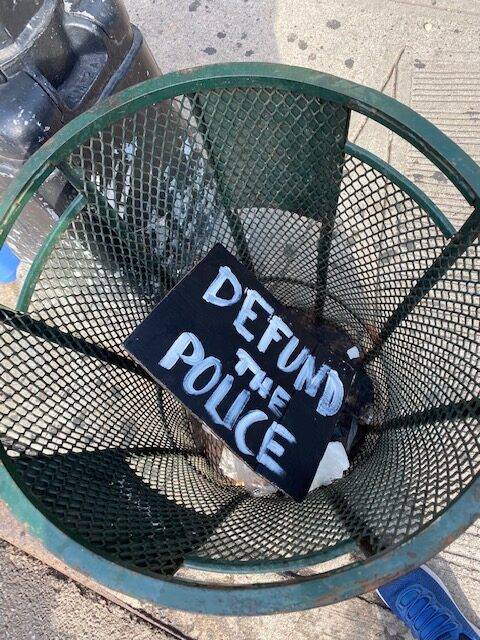 A defund the police experiment gone wild. Minneapolis is a Defund the Police research experiment in real-time. The results so far are grim. Will politicians from other cities see the light or will they continue to charge into the Defund Abyss? New York City has two major elections coming up with serious implications for its future: Mayoral and Manhattan District Attorney. Will all of the candidates address the elephant in the room?

Minneapolis is the epicenter of the defund the police movement. After the killing of George Floyd by MPD Officer Derek Chauvin last Memorial Day Weekend, it has been a race to the bottom. Since then, Minneapolis has suffered record homicides, homeless encampments, lawsuits against the city council, and a request of $6.4 million to hire more cops. Last June, the Minneapolis City Council voted to eliminate the entire department. Unfortunately, I don’t see a turn around in recruitment nor the crime rate any time soon. In 2020, violent crime soared in Minneapolis and 2021 is not looking any better.

Since the death of George Floyd, more than 200 cops have quit the Minneapolis Police Department. Less cops, more violence. If you believe that cops don’t affect crime, maybe it’s time we take a fresh look at Minneapolis. What’s worse is that a smaller MPD with increased violence,  will have a lower homicide clearance rates. As more cases go unsolved, the likelihood of retaliation increases. It’s a non-stop cycle of violence.

What Does This Mean for New York City

The answer should be nothing, however, we know that’s not the case. The killing of George Floyd reverberated throughout every city in America with the call to “defund.” Politicians crammed on the bandwagon and tried to outdo one another. The gaggle of mayoral candidates are no different and most are still parroting activist talking points. What has exacerbated the rush to Criminal Justice reform in New York, is Governor Cuomo’s April 1st deadline. When did the word “Reform” become synonymous with “Good”?

All but one or two of the mayoral candidates have addressed the rise of violent crime in New York City. For some reason, if they addressed the violent crime issue, it might hinder their chance? Do I have to remind them of the nearly 100% rise in homicides last year? Or that nearly 96% of those victims were Black and Latino? I know, it’s not 1990, but do you really think the 1990s happened overnight? It took decades to reach those grim milestones. The Pandemic aside, 2020 was a violent year in the U.S. for a variety of reasons.

Police Retention is a Major Problem

The same police officer retention problem that we are seeing in other jurisdictions is happening in NYC. In 2020, over 2,600 officers from the NYPD retired – a 72% increase from 2019. That number doesn’t include those that left for other departments. Law enforcement experience can’t be replaced overnight. It will take a long time to get new investigators up to speed. Until then, clearance rates will more than likely suffer.

Are all the Police Reforms Bad?

Not all of the reforms are bad, only the implementation was bad. For instance, the City disbanded the NYPD Homeless Outreach and it seems no one was there to pick up the slack. Homeless populations rose, especially in the Subway system and with it, so did the violence. The proverbial cart before the horse.

The City has a chance to replace cops with social workers on certain calls. I’m a proponent of this, however, the narrative that these calls for service are without danger is bad messaging. Many calls don’t go ‘sideways” because the cops are present. It’s not a static office visit or conducted in a hospital setting. When you are inside someone’s house, an awful lot can change in a split second.

Why Do I Care?

I’m no longer a resident of New York City and can’t vote. However, I left enough blood, sweat, and tears on its streets to make me care for a lifetime. That never changes. Many of us worked hard to help restore the luster that shines to this day and unfortunately, many made the ultimate sacrifice. I don’t want to see it slip backwards.

New York City and other towns, are one or two major political blunders away from descending further down that slippery slope. Shouting anti-police rhetoric may get you elected but at what cost?

Is violent Crime Up in NYC?